Hi, everyone!
Get ready for the sweetest take on a classic board game. The gameplay rules of Jolly Battle are based on a beloved and nostalgic family game.

Find the rules below.

The standard game board is ten by ten squares.

A player manages a team of 10 cakes. The four smallest cakes may occupy one square each. The three cakes of the following bigger size occupy two squares each. You also have two cakes of three squares in size each. The biggest and longest cake occupies four squares on the game board. The players place their cakes on their respective sides of the game board. The ships must not come in contact with one another. The cakes of two or more squares in size can be positioned either horizontally or vertically.

The players may use any offensive strategy from the classic BattleShip game, or they may come up with an effective plan of attack. The fate of your cakes is in your hands, Captain!

The game requires two opposing players. You can play against another player or the AI. You take turns to shoot caramel. One hit only covers one square on the opposing player’s game board. If a cake is hit by a caramel shot, the attacker may take another turn. If a player shoots and misses, their turn is over. The first player who eats all the cakes of their opponent wins.

The rules are very simple making the game fun, thrilling, and delicious. 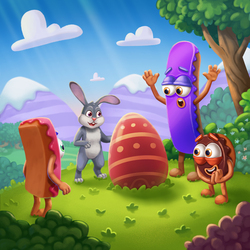 Hello, everyone! There is some great news! We’ve already got an update for Jigsaw Puzzle by Jolly Battle which is neither one, nor two, but FIVE whole new packs of our exiting game! Each pack consists of a separate story with a unique plot, so you have to collect every puzzle in the pack from […] 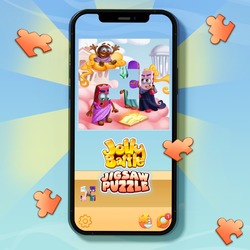 Check out cute images in the November update!  All puzzle lovers will love this game, both Jolly-Battle-hardened fans and new players. Download Jigsaw Puzzle by Jolly Battle for free now! New packs are already in the game: – Thanksgiving Day – Camping – Jurassic World – House of Butterflies – Gods of Olympus – Magic […]